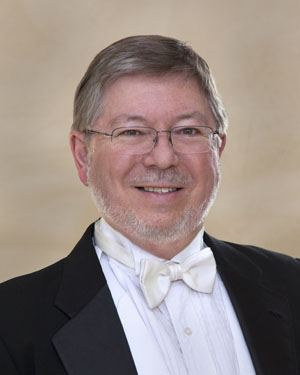 Dr. Christian Wilhjelm has been the Conductor and Music Director of the New Jersey Wind Symphony (formerly the Ridgewood Concert Band) since its founding in 1983. Under his direction, the NJWS has become widely recognized as one of the leading wind orchestras in the nation.

Dr. Wilhjelm graduated from the New England Conservatory where he studied with Harry Shapiro of the Boston Symphony. He was the principal hornist with the Conservatory Symphony Orchestra under the direction of Gunther Schuller and the Conservatory Wind Ensemble under the direction of Frank Battisti. While a student, he spent three summers performing in the Fellowship Orchestra at Tanglewood where he had the distinction of being named a Leonard Bernstein Fellow. He received a Master of Music degree from The College of New Jersey and a Doctor of Education degree from Teachers’ College, Columbia University.

From 2000-2005 Dr. Wilhjelm was the Music Director of the legendary Goldman Band in New York. His other conducting appearances include the Allentown Band, the Hanover Wind Symphony, the United States Army Field Band, the Virginia Wind Symphony, the United States Military Academy Band at West Point, the Norwalk Symphony (CT), the Plainfield Symphony (NJ) the Adelphi Chamber Orchestra, In December 2000, the legendary Harvey Phillips appointed Dr.Wilhjelm as the conductor of the annual Tuba Christmas in New York City. This event, which features up to 500 tuba and euphonium players, is one of the longest running holiday events in Rockefeller Center (second only to the annual tree lighting).

Dr. Wilhjelm has been an active educator for over four decades. He has been the band director at Pascack Hills High School in Montvale since 1984, and has served on the teaching staffs of Virginia Commonwealth University, The University of Richmond, William Paterson University, Montclair State University, and New York University where he served as the interim Wind Ensemble Director in 2006-2007. In 2014, Dr. Wilhjelm joined the staff at Ramapo College in Mahwah, New Jersey as the director of their new concert band.

As a professional musician, Dr. Wilhjelm has performed the French horn with the Boston Symphony, the Boston Pops and, as a principal, with the Boston Ballet Orchestra, the Boston Opera Orchestra and the Richmond Symphony. Dr. Wilhjelm has performed with many great conductors including Leonard Bernstein, Sir Colin Davis, Arthur Fiedler, William Steinberg, and Sejii Ozawa. He has also performed as a horn player with many leading jazz and popular musicians including: Burt Bacharach, Benny Carter, Art Farmer, Isaac Hayes, Rufus Reid, Sonny Rollins, Henry Mancini and the hornist with the brass quintet in residence at the Cathedral Basilica of the Sacred Heart in Newark, NJ.

Dr. Wilhjelm has taken the band on critically acclaimed tours of Central Europe (1998), the French Riviera (2003), China (2008), and Brazil (2009) and Germany, Austria, and Italy (2010). In April 2012, the band was a co-sponsor and featured performer at the Association of Concert Bands national convention in Poughkeepsie NY. With the RCB/NJWS, he has produced two compact discs: “Organic Band” with organist David Fedor, and “Celebrations” featuring the music of composer Michael Valenti. Dr. Wilhjelm is currently the New Jersey State Chair for the National Band Association, the state membership chair for the Association of Concert Bands, and member of the selection committee for the Sudler Silver Scroll, the nation’s top honor for community bands presented by the John Philip Sousa Foundation.

In April 2014, Dr. Wilhjelm was elected to the American Bandmasters Association. This storied organization, founded in 1929 by Edwin Franko Goldman, Albert Augustus Harding, and John Philip Sousa, has been the premier association of professional conductors and composers active in the band world for 85 years. Dr. Wilhjelm is the first New Jersey high school educator to be invited in the association’s history.

Side By Side Concert Representatives
Michael Connor
Laurie Kunzle