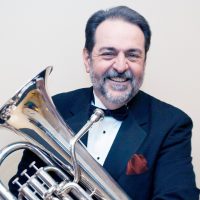 John Palatucci is a performing musician on euphonium and trombone as well as a singer, conductor, clinician, an adjudicator and educator. He holds a Bachelor of Arts degree in music education and a Master of Arts degree in music performance from Montclair State College of New Jersey as well as a Master of Education degree in educational leadership with all accompanying certificates and licenses from NJ EXCEL. Making his New York solo debut in 1983, from 1986-2005 he served the famous Goldman Memorial Band of NYC as principal euphonium, featured soloist, conductor, and business manager. He has toured and recorded with Keith Brion’s New Sousa Band and the Gramercy Brass Orchestra as well as with other musical luminaries ranging from Placido Domingo to Dave Brubeck to Frankie Valli and the Four Seasons. He is a charter member of the NJ Wind Symphony where he serves as associate conductor, principal euphonium, and featured soloist. Since 1990, he is the music director of the Orpheus Club Men’s Chorus of Ridgewood. Recent appearances include soloing with the Westchester Symphonic Winds at the Caramoor Festival, the world premiere of Patrick Burn’s Vignettes for solo euphonium and concert band with the NJ Wind Symphony, Yankee Stadium and conducting at St. Patrick’s Cathedral and the National Chorale’s Messiah Sing-Ins on the stage of Lincoln Center’s David Geffen Hall.