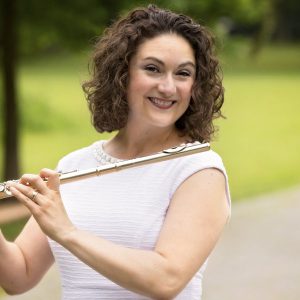 Kristin Bacchiocchi-Stewart, D.M.A. is a dedicated teacher, chamber musician and an enthusiastic advocate for contemporary music. She is the director and founder of The Flute Academy, located in Bergen County, New Jersey. She is passionate about working with aspiring young musicians, helping them shape their love of music. Dr. Bacchiocchi-Stewart has served on the faculties of Union College, Peabody Institute of The Johns Hopkins University, Frostburg State University, Ithaca College and Schenectady County Community College. She is an instructor and administrator for the Marina Piccinini International Master Classes and has also been on the faculty for the Savage Mountain Summer Chamber Music Summer Series and Flauto Musicale. She was a prize winner at the 2002 National Flute Association’s Young Artist Competition, a participant in the First Beijing Nicolet International Flute Competition and has appeared as a semi-finalist in the Myrna Brown and Ducrest Young Artist Competitions. Dr. Bacchiocchi-Stewart is principal flute with The New Jersey Wind Symphony and is a member of the Lyra Ensemble. She has performed with TRITONIS (flute, cello, and guitar), guitarist Joel Brown, percussionist Michael Zell, I Venti Semplice, the Evolution Contemporary Music Series, and the After Now: Nothing You’ve Heard Before music series, among others. She has given concerts, lectures, workshops and master classes throughout the United States and has also performed in several groups throughout Europe and Japan. She has maintained large flute studios for over 20 years both privately and in the college setting. She has taught levels ranging from beginner, intermediate, adult amateur, advanced, college and professionals. Her students have been among the flute sections of several youth orchestras and admitted into prestigious schools such as The Eastman School of Music, Oberlin Conservatory, Carnegie Mellon, New England Conservatory, The Peabody Institute, Indiana University and Ithaca College. Her academic achievements include a Doctoral of Musical Arts Degree from the Peabody Institute of The Johns Hopkins University, a Master of Music Degree from the University of Cincinnati College-Conservatory of Music, and a Bachelor of Music Degree from Ithaca College. She has participated in the Aspen Music Festival, the Colorado College Music Festival, and the Zurich Masterclass series. Her main teachers have been Marina Piccinini, Bradley Garner, Wendy Mehne, Claudia Anderson and Selma Moore.