All attendees must show proof of full vaccination.  Non-vaccinated audience members must wear masks at all times.

Join us as we close out our 2021-2022 season with “Brass and Winds”, highlighting outstanding musicianship of three outstanding ensembles. The Cobalt Quartet, a New York-based saxophone quartet, will kick off the evening with a prelude performance. The evening will continue with a concert from the New Jersey Wind Symphony with the Imperial Brass joining the program as a guest ensemble. This is an evening of music not to be missed!

Imperial Brass has been delighting audiences around New Jersey for over 30 years. Originally founded as the Rutgers Alumni Brass Band by alumni Steve Dillon and Jon Korzun with arranger Mark Freeh, the band gave its first concert in April of 1991. Since then, Imperial Brass has presented highly entertaining programs that include traditional brass band literature, classical arrangements, popular music and more. 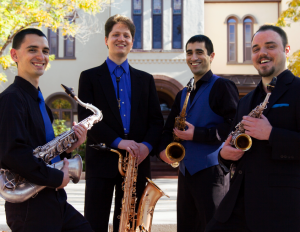 The Cobalt Quartet is a saxophone quartet based in the New York metropolitan area. The quartet is particularly interested in presenting modern works by living composers alongside the very best of the repertoire and lesser-known contemporary works, whether written originally for saxophone or transcribed. Since its founding in the summer of 2017, the ensemble has presented highly varied and exciting programs with several partners including: AWCANYC, Concrete Timbre, Andrew Koss, MSO, LICA, and NYCC. Cobalt will be releasing its debut album, “Cobalt Blue” in the summer of 2022. Please visit www.cobaltquartet.com to learn more.

Fort Sheridan March
Symphony of Marches
Why Did I Choose You?
Cornet Soloist
American Rhapsody