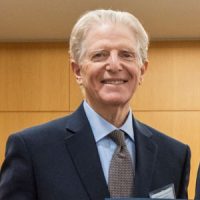 Larry, a resident of Allendale, NJ is married to Donna, his bride of 52 years. They are the parents of two children and the grandparents of four, aged from middle school to college. Larry joined the NJWS Board in 2012 following retirement after decades in the world of consumer products as general counsel, primarily at Reckitt & Colman and American Safety Razor Company. In recent years Larry’s focus on the Board has been on community engagement, including Bergen County, other local governments, social services agencies, and general outreach to the broader community. Larry is long retired from his short career as a trumpet player, having failed to hit a high C since the 1960s.